Although many westerners still imagine Vietnam through the lens of war, it is in reality a country filled with captivating natural beauty and tranquil village life. Its highlands and rainforest regions, far from being devastated, continue to yield new species and team with exotic wildlife. Its islands and beaches are among the finest in all of Southeast Asia, and its cuisine is very possibly the most delicious you will ever find. Over two decades have passed since Vietnam was officially united, and in that time it has done a remarkable job of healing its wounds. Today, this gracious and graceful country is an outstanding travel destination.

Shaped like an elongated S, Vietnam stretches the length of the Indochinese Peninsula and covers a surface area of 128,000 square miles–making it roughly the size of Italy or, in the U.S., New Mexico. China lies to the north, Laos and Cambodia to the west, and the South China Sea to the east.

Topographically, Vietnam is a verdant tapestry of soaring mountains, fertile deltas, primeval forests inhabited by exotic fauna, sinuous rivers, mysterious caves, otherworldly rock formations, and heavenly waterfalls and beaches. Beyond nature, the curious and open-minded visitor will find in Vietnam a feast of culture and history.

For convenience, the country can be thought of as comprising three unique areas: north, central, and south. The north is known for its alpine peaks, the Red River Delta, the plains of Cao Bang and Vinh Yen, enchanting Halong Bay, and historic Hanoi, as well as for the diversity of its ethnolinguistic minorities.

Central Vietnam, also home to many ethnic minorities, is characterized by high temperate plateaus rich in volcanic soil and by spectacular beaches, dunes, and lagoons. It is also the location of the ancient imperial city of Hue. In the South, visitors encounter modern life in Ho Chi Minh City (formerly Saigon) and the fertile alluvial delta of the Mekong River. Vietnam’s territory also encompasses a large continental shelf and thousands of archipelagic islands.

Vietnam’s climate is as complex as its topography. Although the country lies entirely within the tropics, its diverse range of latitude, altitude, and weather patterns produces enormous climatic variation. North Vietnam, like China, has two basic seasons: a cold, humid winter from November to April, and a warm, wet summer for the remainder of the year. Summer temperatures average around 70 degrees Fahrenheit (about 22 C), with occasional typhoons to keep things exciting. The northern provinces of Central Vietnam share the climate of the North, while the southern provinces share the tropical weather of the South.South Vietnam is generally warm, the hottest months being March through May, when temperatures rise into the mid-90’s (low-30’s C). This is also the dry season in the south, followed by the April-October monsoon season. 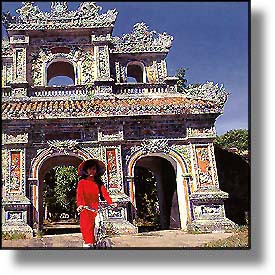 Legend has it that Vietnam’s origin lay in the harmonious union of lac Long Quan, King of the Sea, and Au Co, Princess of the Mountains. Real life was not so paradisical, as Vietnam’s early history–like its recent history–is characterized by a nearly continuous struggle for autonomy. First came an entire millenium of Chinese domination, which was finally thrown off in the 9th century. External control was imposed once again in the 19th century, when Vietnam was occupied by the French.

French rule lasted until WWII, when the country was invaded by Japan. At the war’s end the predominantly Communist Viet Minh, which had led the resistance movement against the Japanese, declared the country’s independence. The French Indochina War ensued, until France admitted defeat in 1954, and the Geneva Accords left Vietnam divided into a Communist north and an anti-Communist south. By this time the U.S. had replaced the French as the primary sponsor of the anti-Communist government. Tension between north and south mounted over the next few years, until in 1964 full scale war erupted. The conflict lasted for the next eight years, and involved hundreds of thousands of troops from the U.S. and other countries. In 1973 a cease-fire agreement allowed the U.S. the opportunity to withdraw its troops, and in 1975 the southern capital of Saigon fell to the North Vietnamese. An extended period of political repression followed, prompting massive emigration from the country. In 1991, with the fall of Communism and the end of the Cold War, many western powers re-established diplomatic and trade relations with Vietnam. The last country to do so, in 1995, was the U.S.

The richness of Vietnam’s origins is evident throughout its culture. Spiritual life in Vietnam is a grand panoply of belief systems, including Confucianism, Taoism, Buddhism, Christianity, and Tam Giao (literally ‘triple religion’), which is a blend of Taoism, popular Chinese beliefs, and ancient Vietnamese animism.

The most important festival of the year is Tet, a week-long event in late January or early February that heralds the new lunar year and the advent of spring. Celebration consists of both raucous festivity (fireworks, drums, gongs) and quiet meditation. In addition to Tet, there are about twenty other traditional and religious festivals each year.

Vietnamese architecture expresses a graceful aesthetic of natural balance and harmony that is evident in any of the country’s vast numbers of historic temples and monasteries. The pre-eminent architectural form is the pagoda, a tower comprised of a series of stepped pyramidal structures and frequently adorned with lavish carvings and painted ornamentation. Generally speaking, the pagoda form symbolizes the human desire to bridge the gap between the constraints of earthly existence and the perfection of heavenly forces. Pagodas are found in every province of Vietnam. One of the most treasured is the Thien Mu Pagoda in Hue, founded in 1601 and completed more than two hundred years later. In North Vietnam, the pagodas that serve as the shrines and temples of the Son La mountains are especially worth visiting. In South Vietnam, the Giac Lam Pagoda of Ho Chi Minh City is considered to be the city’s oldest and is notable as well for its many richly-carved jackwood statues.

As a language, Vietnamese is exceptionally flexible and lyrical, and poetry plays a strong role in both literature and the performing arts. Folk art, which flourished before French colonization, has experienced a resurgence in beautiful woodcuts, village painting, and block printing. Vietnamese lacquer art, another traditional medium, is commonly held to be the most original and sophisticated in the world. Music, dance, and puppetry, including the uniquely Vietnamese water puppetry, are also mainstays of the country’s culture.

Although rice is the foundation of the Vietnamese diet, the country’s cuisine is anything but bland. Deeply influenced by the national cuisines of France, China, and Thailand, Vietnamese cooking is highly innovative and makes extensive use of fresh herbs, including lemon grass, basil, coriander, parsley, laksa leaf, lime, and chili. Soup is served at almost every meal, and snacks include spring rolls and rice pancakes. The national condiment is nuoc mam, a piquant fermented fish sauce served with every meal. Indigenous tropical fruits include bananas, pineapples, coconuts, lychees, melons, mandarin oranges, grapes, and exotic varieties like the three-seeded cherry and the green dragon fruit.

Today there are about 90 million people in Vietnam. Eighty percent of these are ethnic Vietnamese, while the remaining twenty percent comprises more than fifty separate ethnic groups. About seven million of these ethnic minorities are members of the hill tribes ormontagnards (French for mountain people), making their homes and livelihoods in the spectacular mountains of the north and central highlands. Among the many languages spoken in Vietnam are Vietnamese, Chinese, English, French, and Russian.